My favourite Haiku, as many of you know

Last month I learned a new word from Her Excellency the Right Honourable Mary May Simon. Her Excellency is Canada’s first Indigenous governor general.

Ajuinat is an old Inuktitut word but brand new to me, and it “is roughly pronounced  aye-yoo-ee-nah-tah.” It roughly translates to “when you are confronted with adversity, or things that are difficult, you keep going.”

In the article I read in CBC news, they say that ajuinat means “you don’t give up and you need to make a commitment to continue to make changes.” Mary Simon uses this word to recognize the perseverance of those in the Indigenous community who persevere against the odds –  to right wrongs, and make changes.

She also uses the word for something she does – making random calls of kindness, to leaders and change makers who might be able to use a pick me up or a word of cheer.

Like many of the Japanese  words I love and write about here: eg – ikigai, arugamama, wabi-sabi, ichigo ishie, sumimasen, they are so steeped in culture and the language of the culture that it becomes impossible to transmit the true essence with a simple translation. We only scrape the surface.

Another example is the German word gemutlichkeit. According to Wikipedia, “It conveys a feeling or state of friendliness, warmth and good cheer… coziness, peace of mind and a sense of belonging.” I heard the word often in Austria when someone suggested we go to a certain place for dinner or a coffee, or to someone’s home. It wasn’t about the food (food was always good) and it meant more than being cozy. Rather, it was an immediate sense of well being that you felt just being in that place. The atmosphere exuded something you couldn’t name in English, but you could feel it.

When I read about ajuinit I knew it was a word for me. Although it was associated with survival in the harsh climate of the Canadian north many situations came to mind where we can apply it today.  However, I will need to dig a little deeper to get the full import of what the word means and how to  work with it, in the right spirit. There is no one English word to convey the wholeheartedness of ajuinata.

In the CBC article written by Alistair Steele, he quotes Manitok Thompson, ED of the Inuit Broadcasting Corporation. “Today, it’s something that needs to be heard across the board for nurses, for doctors, for children, for youth, for our mothers, our fathers –  these words are very powerful in our culture because we are survivors.”

I think we have important opportunities to pause and take in the meaning when we learn a word or a concept from another culture. Language is powerful and we can use words as gifts or as weapons. For myself, I have received many gifts from the language of others. And I will hopefully take the essence of ajuinata into my own struggles and dreams.

Thanks to CBC for publishing this article. You can read it in full  here. 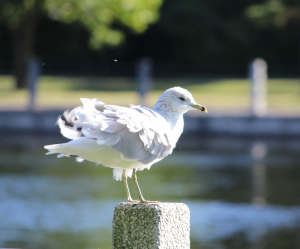 1:) How other languages inform our own:People speak roughly 7,000 languages worldwide. Although there is a lot in common among languages, each one is unique, both in its structure and in the way it reflects the culture of the people who speak it.

Stanford professor Dan Jurafsky said it’s important to study languages other than our own and how they develop over time because it can help scholars understand what lies at the foundation of humans’ unique way of communicating with one another.

“All this research can help us discover what it means to be human,” Jurafsky said.

3:) Wishing you a beautiful May weekend. It’s Mother’s day on this continent and with a little luck we will have sunshine and flowers. Even without we will have heartfelt warmth and love. Many thanks for stopping by. Warmly, Trudy

Making Sense of It All
Scroll to top