Hampton community, came out on a rainy day, to greet Nelson Mandela’s grandson.

It was a small thing, really. My cousin Sonya lives in small town Hampton New Brunswick – poulation 4289. She texted me to say “Nelson Mandela’s Grandson is coming to Hampton tomorrow. He will have coffee at Station 33, and visit the Credo Monument.” There may be at best three  reader’s of this blog who know what the Credo Monument is let alone Hampton. I was curious. As it turns out:

It is a memorial to John Peters Humphrey – 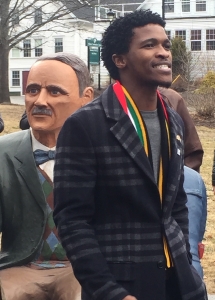 So, Siyabulela Mandela, didn’t come to Hampton for coffee. He came to honour John Peters Humprey;  a humble man, from ordinary circumstances. “Like my  grandfather,” he said, “two men who rose up to make a change in the world.”

When John was a young boy, he lost both his parents to cancer. He also lost his left arm in a fire, and unfortunately, he was brutally bullied as a kid. Labeled a mischief maker, (like young Nelson Mandela) either boy could have gone on to create havoc in the world; instead, their joint legacy is one of working for dignity and freedom for all, regardless of colour, race or homeland. 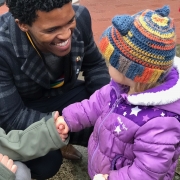 Siyablelea, a scholar in his own right, generously spoke about the foundation that John Humprey and his grandfather established and about his hope that all of us will continue to work on behalf of others. I loved seeing the photos Sonya sent, where he is equally at ease with little children and the story she told me about how he gave his umbrella to an older woman, who was standing in the rain. He inspired everyone.

Coincidentally, as crazy as it sounds,  this isn’t the end. I have a second story about Hampton, which is also about legacy.

His name is Randy O’Dell.

Randy, another young boy from this tiny town, was forced to go to work at 12 years old, after his Father died.  His Mother had five young children to support and she needed his help. Of course, there was no way to know that the consequences of that job would lead to asbestosis in his lungs and an early death at 65.

But here’s the thing. In between the 12 year old and the 65 year old Randy, a golden thread unfurled. No stranger to hard work the young Randy moved to Calgary as a journeyman electrician and eventually formed his own company. He was admired for his brilliant business mind, attention to detail and skill with people. Yet, Randy was not selfish and he wanted to leave behind something meaningful for Calgarians, the city that provided him with many opportunities.

And this is what he did. He made it possible for Wellspring Calgary to build a second vitally needed location for those affected by cancer. Named the Randy O’Dell House it will open this September. Randy didn’t live to see the house but his legacy will live on.  Not just the $4,000,000 dollars that he donated before his death, but the thousands of people diagnosed with cancer,  and their families, who will never even know Randy, but who will not have to face cancer alone. In fact, at the Randy O’ Dell House they will be exposed to the life altering programs and services that meet the emotional, social, practical and restorative needs of people living with cancer and those who care for them. All free of charge. This is quite the legacy.

In thinking about this, it doesn’t stop there. Randy’s legacy began with the first kid he gave a job to. Hundreds and hundreds and hundreds of people  came through O’Dell Electric over the past four decades.  Their lives changed because they worked in his company  and were the recipients of his leadership. 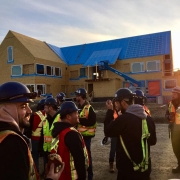 I find it mind boggling. Even before the bequest to Wellspring he had left a lasting legacy.

Ok. You must think I am now finished.

But I’m not. As Randy reflected on what else he could do to say thanks to Ca 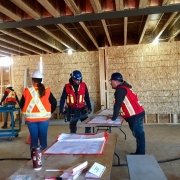 lgary, he thought about the hundreds of young electricians who came to his company from SAIT – the school in Calgary that trained those young electricians. This reflection led to a $2,000,000 contribution to create the Randy O’Dell Centre for Electrical Trades at SAIT.  This Centre will benefit thousands of students in apprenticeship programs and more. Randy was determined to give back and these two permanent legacies do just that. Both will open in 2019.

Ten days ago on March 23rd an enthusiastic team of O’Dell Electric staff and their families volunteered all day to complete the rough in at the Randy O’Dell House. Talent, compassion, smiles, laughter, tears and nourishment for body and soul were on hand that day. My cousin Alan was one of them. A house powered not just with electricity but with love.

There are many legacy stories. These are just two. And it isn’t about the money. John Humphreys used the power of words, which impacted people while he was alive and continues after his death.  Randy transformed a difficult life into a better life, but not just for himself. He contributed to improving the lives of so many others, while he was alive, by giving them opportunities. John and Randy’s legacies live on. A deep bow to them both, these boys from Hampton, population 4289.

And a deep bow to Nelson Mandela and his grandson Siyabulela Mandela working to carry on his grandfather’s legacy.

Dr. Jinroh Itami, often said “it is more important to do what we can do with our life and to leave something useful for society rather than merely setting our mind at rest.”

Note 1) We all create our legacy everyday. Not everyone can do what John and Randy and Nelson Mandela did. But we all do something. Everyone of our words and actions leave ripple effects in the world. Sometimes, we hope the sands of time will obscure what we wish we had done differently. But the past is written in stone. The great thing is that as long as we are still breathing, we have the chance to do things differently now. “Start where you are,” as Pema Chodron says. There is no such thing as perfection; we fall down and we get up each time. That too is a legacy.

Note 2) Community is vital to our lives. We need community and we can contribute to making our communities better. There are multi-coloured threads, all with a hint of gold weaving their way in and out of our circles of influence. The tapestry becomes rich, meaningful and beautiful. The communities of Hampton, Wellspring, SAIT and Randy O’ Dell Electrical are on my mind tonight. They are representatives of millions of communities worldwide, and made up of billions of people doing such fine and good work in the world. How lucky to be part of the human community.

Note 4) Thanks to Sonya, and her friend Debbie for the photos of Mandela and to Patti Morris’s facebook for the O’Dell volunteer day. And thanks to you dear reader who tunes in every Wednesday. Next week I will be short and sweet on this page. Enjoy the April showers and flowers. Warm greetings to all, Trudy

A Sufi Tale for the here and now

Nature’s Healing Gifts are Waiting For You
Scroll to top