Aldous Huxley wrote the novel “Brave New World.” Toward the end of his life an interviewer asked: “Dr. Huxley, perhaps more than anyone else alive, you have studied the great spiritual traditions of the world. What have you learned?” Huxley replied, “I think we could just be a bit kinder.”

It is interesting how life goes. After my Mother’s 100th birthday bash I said that I would stop talking about my Mother. However, this week my friend and colleague Barbara, from New York, wanted a zoom visit to talk about my Mother and the role she played in my worldview.  We invited another newer friend as the three of us had been working on a webinar, The Gift of a Long Life.

During that conversation I was asked for some examples of my Mother’s kindness. And without a second thought I told them this story.

It was June and it was strawberry season. It was also the season when I was finishing up Grade five and my new best friend, Peggy Jane was finishing grade six. We were having our first sleepover at my house and I was happy. Peggy and I were kindred spirits who explored the world through books, and imagination and here we were in my four poster bed surrounded by Vogue magazines that my New York aunt gave to my Mother each year at Christmas.

None of us were really interested in the fashion.  Mother considered my Aunt a little  frivolous to give this magazine as an annual gift to a housewife, in a small Nova Scotia town. I, on the other hand, loved it. My friend and I pored through the treasure trove of the back pages, reading every word about the boarding schools in Switzerland and France and other parts of Europe that sounded perfect for us. (side effects of being voracious readers)

As the clock inched close to midnight, the two of us laughed and talked about the schools we would choose, the books we loved, the diplomatic and literary careers we would one day have. We both felt the ease of kinship and simple joy that only two young enthusiastic girls can have.

Our contentment, however, was suddenly interrupted by the sound of my Mother’s footsteps on the stairs. Peggy Jane looked at me, concerned, assuming my Mother would be angry that we were still talking and laughing after midnight. To her surprise, my Mother knocked on the door, opened it, and presented us with a beautiful white tray laden with small sandwiches made from homemade bread and filled with freshly picked and mashed strawberries. There was a single rose in a crystal bowl on the tray, linen napkins and a glass of milk for each of us.

“I thought you girls might be getting hungry,” she announced and to my friend’s amazement, she placed the bed tray between us and went back downstairs.

I remember, still, how my heart was full of happiness and pride to have a Mother so kind. Years later  I met my friend who had a successful career as a national librarian. She had travelled far and wide throughout the world,  and she reminded me about that night and how it had become one of her most treasured memories.

As for me, I felt happiness deep down in my bones as well as in my heart and fully knew in that moment that I had won the Mother lottery. 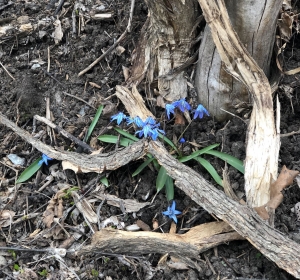 Of course Mother’s Day is coming up on Sunday and I am one of the lucky ones who still has a Mother at 73. This is amazing in and of itself. So I used this lovely visit with my friends, as an excuse, to tell this story. Thank you!

1🙂 Here is a pertinent and fun piece of music for you from Vancouver with vocalists from other choirs too. Phoenix choir.

3:) And enjoy your new freedoms. Here in Ottawa, as of today,  we can sit on the grass in the parks.  (not on a bench and no play structures or sports) No gatherings of more than 5 and still physical distancing if not from the same household. And we can kick a ball around. This is all worthy of celebrating. Let’s work to keep this going, by doing our part.

4:-) We are opening up but not going back to normal. Our diligence is needed even more than before. With spring in the air and a weariness of this unnatural way of living, it is easy to forget how important a role we all play, in keeping the Covid-19 tide at bay. To keep opening up will require our cooperation. Hang in there.

5:) Thank you all for showing up here. I will see you next week.